Millbrook won it's second straight Powerade State Games Gold Medal and complete a four team sweep in the 2015 tournament with a 60-37 win over Southern Durham on Sunday evening. 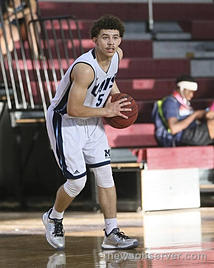 Senior Trejon Jacob stepped up in the final game of the tournament by scoring 19 points, three coming from beyond the arc. Rising Junior, Jordan Whitfield pitched in with 13 points. The Wildcats finished the tournament 6-0 with wins over Jordan, Riverside, Purnell Sweat, East Chapel Hill, Middle Creek, and the Spartans of Southern Durham.

Faison Brock set the tone twenty seconds in as he took a charge on the first possesion of the game. Jacob, who led the team in scoring during the tournament with 14.6 PPG dropped two early three's to give Millbrook a 12-3 lead. John Burwell who was second in scoring during the tournament pitched in with 9 points including a three point play late in the half to help propel the 'Cats to victory. Sophomore's Jabari Brown and Adrian Scarborough pitched in with a combined six points. Monte' Harris who helped lead Millbrook with 17 points against Middle Creek in the semi-final finished with 3 points on the night.

For Millbrook, it is the program's second straight Varsity Gold Medal, and their 3rd State Games Gold Medal of the summer. The Freshman, and Junior Varsity teams also won their tournaments earlier in the summer. Millbrook's Women's Basketball team also took home the Gold Medal with a victory over Panther Creek on Sunday.