The worst loss in Coach Matt Edwards' tenure at Millbrook came on September 28th at Heritage as the Huskies pounded the Wildcats, 6-2. One of the nation's top goal scorers, Logan Shytle registered his fifth hat trick of the season that night. Since the loss, Millbrook has been playing their best soccer of the year, and it continued with a 1-1 tie against the Huskies on Wednesday night. This hot play is coming at a perfect time for Edwards' group.

"Right now we have guys stepping up and playing some of the best soccer of their careers. We have rebounded so well from that loss three weeks back, I mean going from six goals to just one is a huge improvement. Anything but a loss in the standings is doing nothing but helping us make our playoff push."

If you're a fan of defense, then you would have loved the opening 73 minutes of play as each team matched each other stop for stop. Neither group could muster many chances. Cooper Green and Noah Davison would deny the several chances that they had in the opening 20 but going into halftime, the score was tied 0-0.

One of the more remarkable feats this season was the one performed by sophomore Alex Combs, and junior Emmet Wood. Between the two of them, they have played less than three combined games at centerback. With top defenders, Ryan Johnson and Jose Garcia-Ramirez out of the lineup, the two defenders managed to slide in and hold Logan Shytle in check. As it goes with all great players, they will find a way to make an impact, and that's what the Heritage forward would do with 7:17 left in the game, as he gave the Huskies a 1-0 lead. Despite the goal, Coach Edwards was thrilled with Alex and Emmet's play.

"Those two guys have started all year for us but not at centerback... they have both rose to the occasion and they were phenomenal tonight. Alex plays defense on his club team so he has had some experience at the position and then Emmet is just super athletic and he can play all over... what really stands out is the fact that both of them came to me asking to take on that roll, they didn't wait for me to call their number and you know, facing Logan Shytle is a huge task and it requires having the spotlight shine on you so for those guys to embrace that and play really well tonight was amazing."

Since the 6-2 loss to Heritage, Millbrook has gone 3-2-2, their best seven game stretch of the season. In that span, junior midfielder, Ian Pearlswig has scored three goals and assisted on another. He would find the back of the net with 3:46 left in the match to tie things up at 1-1. This time, the Pearlswig kick was not of the penalty shot variety as Ian set up for a corner kick to the left of the Husky cage. His high arching shot bounced off of the Heritage goalkeeper, and into the net for the score. For Pearlswig, it was his 5th goal of the season, and he said that the earlier play of Cooper Green, the netminder, helped set up that goal.

"I noticed earlier on that he was swiping at corner kicks to the net rather than punching it away so I focused on swinging the ball towards the frame and just hoping that either he made a good play on it or it would bounce in, and that's what ended up happening."

The resiliency to comeback and tie the game had the Wildcats feeling like they were in a good position but, that late momentum was quickly killed as Shytle darted towards the goal 43 seconds later and collided with Noah Davison right out in front of the net. Davison would come away with the worst blow in the collision as he was forced to exit the game with 3:03 left in regulation. Riding a hot streak of his own, Grafton Potter was called on to takeover between the pipes. The junior goalkeeper hasn't allowed a goal in his last 39 minutes of play, that has carried through the course of his last two relief appearances.

Potter wasn't tested much in the remaining minutes of regulation but he would have to stand tall in the first overtime. For Millbrook, it was their seventh overtime of the season. Over 80 minutes of play is no stranger to the Wildcats and they would come out firing in the extra frames. Green would make two stops in overtime along with seeing a laser from the foot of Michael Pasca sail over the crossbar. On the other end, Heritage would have a pair of chances in overtime but none were bigger than Logan Shytle's chance midway through the first OT. The Husky forward came streaking up the right side and he eluded the Millbrook defense, from there it was one-on-one with the goalie. Shytle would rocket one on net that Potter would deny with a big kick save. That stop would keep things at 1-1 which would be the final score.

With the tie, Millbrook moves to 7-6-5 on the season, 4-5-3 in the conference. Next up is a battle on the road at Leesville. The Pride won 4-3 three weeks back on a long free kick from 40 yards out. Pearlswig, Pasca, and Wrenn Pallas found the back of the net for the Wildcats that night. That match is slated for 6:30 on Tuesday. For more information, follow Millbrook Soccer on Twitter at @soccer_mhs. 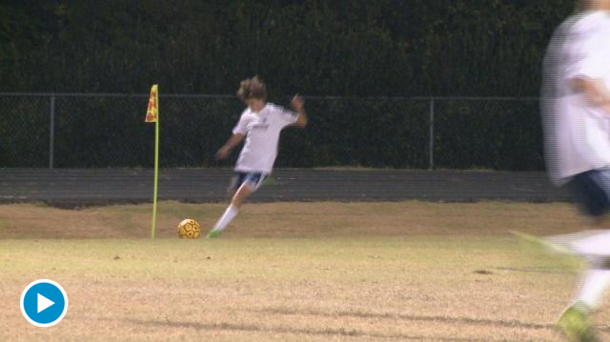