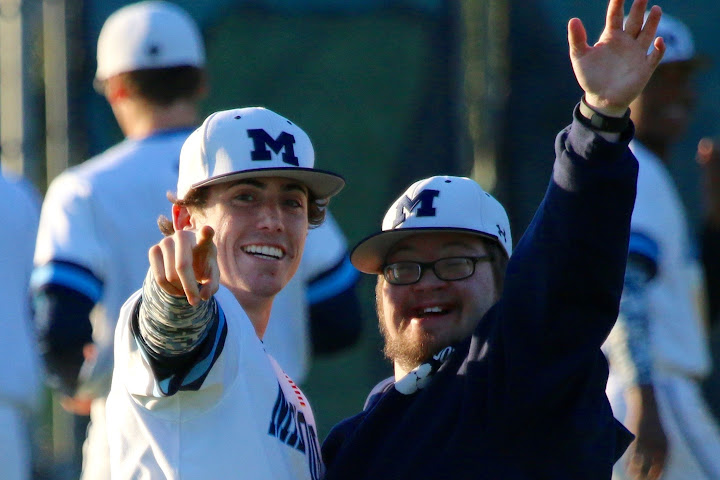 Millbrook’s Baseball team had just dropped a winner-take-all conference championship game on Saturday afternoon to rival Sanderson. Having finished second in the conference for a fourth straight season, the Wildcats collectively hung their heads while huddled up in the outfield. But amongst that huddle was the most optimistic member of the baseball program, Kevin Iannucci. As always, Kevin broke the huddle with a loud, and proud “1-2-3” followed by the team joining him with an even louder “Millbrook”. Iannucci’s fifth season with the team is coming towards a close, and he has been one of the most valuable members of the program, teaching many that it’s just a game and to be positive regardless of the outcome.

As Kevin makes his way from left field back to the dugout, Cody Lane, a junior on the team slings his arm around Kevin’s shoulder and proceeds to walk the rest of the way with him, exchanging laughs with each step that they take. Moments later, Iannucci puts his white Millbrook Baseball jersey back on and proceeds to walk over to Head Coach Austin James. After patiently waiting for his turn to speak, Kevin hands his phone over to Coach James who after a tough loss, immediately brightened up to snap a group picture of Kevin and several Millbrook Baseball alumni. His ability to bring joy to those around him is infectious according to James, “Kevin is a spirited member of our team.  He is often the loudest cheerer in the dugout, and he has a short memory whenever we experience failure.  He loves us unconditionally, regardless if we won or if we made the correct decision or if we made a great play”.

The now 21 year old Iannucci got his start with the team during his junior year at Millbrook in 2012, and he has since won the Millbrook Baseball "Manager of the Year" award four times along with a school wide "Manager of the Year" award during his senior year. A former Millbrook Baseball coach had Kevin as a PE student, and quickly found his love for the game, and passed it along to Coach James who at the time was the JV coach. James brought Iannucci on that season, then took him with him up to Varsity in 2013, since then the rest is history. That 2013 Wildcat squad featured a handful of players that may be drafted into the Major Leagues in years to come, but despite the abundance of talent on the field, the superstar was always the one perched over the railing of the dugout. “No matter what happened, whether it was a bad inning or an out at the plate, he would always find a way to make you smile or laugh” says BJ Nobles, a relief pitcher at Western Carolina University and member of the 2013 team, “Kevin is a person that I’ve looked up to since the day I met him. His outlook on life is one that I've tried to mimic because he lives every moment with a smile, and he is one of the most genuine and most caring people in the world”.

Brian Miller, a member of the Class of 2014 echoes very similar sentiments when speaking about his best friend Kevin. Now the leading hitter for one of the top 25 college teams in the country, Miller says that “Kevin became my best friend quickly after we met at Durant Middle School. Whenever I need a smile to be put on my face the most, he’s the one there for me. Whether it's talking about girls or playing video games, Kevin is my best friend and I love him to death. I'm proud of the man he's becoming and I'm so thankful for all that he does for me and for others”. Iannucci can often be spotted wearing his Millbrook Baseball jersey with the #5 emblazoned on the back, the same number that Miller wears for the North Carolina Tarheels.

Mutually, Kevin and Millbrook’s Baseball players are each other’s biggest fans. Iannucci was involved in theatrical productions at Millbrook, and still to this day he appears in acting roles on stages around the Triangle. After a performance earlier this year, almost two dozen players and coaches attended and gave him a standing ovation. “Our guys want to spend time with Kevin and support him in his endeavors.”, says Coach James, “Anytime Kevin is involved in something outside of school, we genuinely want to go and support him, just as he supports us each time we play a baseball game. We also feel a great amount of love and support from Kevin's parents, Anne and Vinny. They attend every. single. game. Our teams never miss an opportunity to see Kevin do his thing! He is quite an actor”. Those ovations fuel Kevin’s energetic personality which always carries over to the Wildcat dugout.

Regardless if things are going good or bad for the team, Iannucci can be found singing the national anthem out loud while standing on the baseline before the game, snapping selfies in the dugout with players, and delivering baseballs to the home plate umpire in front of a cheering crowd of fans as Kevin pumps his fist in excitement on his way back to the dugout. “Kevin has always been one of the catalysts for Millbrook Baseball.” says Miller, “from showing you his Power Ranger moves in the dugout to post game speeches, he really does it all for the program.”

Going to watch Brian Miller play at UNC last season, and singing the national anthem on his senior night being a close second, and third, James notes that Kevin’s favorite moment with the team was a year ago during their state championship playoff run. Living and dying on every single pitch during the 2015 playoffs, Iannucci was a right in middle of it all. After the Wildcats upset Leesville Road in the fourth round, the first thing that Coach James was greeted by was Kevin leaping into his arms for a big bear hug. Two wins later, Kevin found himself in a dog pile on the pitchers mound at Fuquay Varina after watching his team advance to their first ever state championship. As the Wildcats received their state runner-up medals at Five County Stadium a week later, many proceeded to put their medal around Kevin’s neck to show their appreciation for him. “Kevin Iannucci is the biggest piece of Millbrook Baseball” remarks senior outfielder Bryce Carnevale, “he has been here longer than any of us and he knows what it takes to be successful. Kevin is the teammate in the dugout that is always picking you up when you fail, and he is always there celebrating your successes. Without Kevin this program would not be the same”.

Kevin Iannucci personifies the many things that the Millbrook Baseball program is. “Kevin loves every single person on the team. No teammate that i’ve had will ever match the kind of teammate and friend that he has been” says Nobles. Brian Miller adds that “Kevin really helps put into perspective how little sports mean in the grand scheme of things, and how awesome it is to have a friend who is always joyful and loving no matter what the circumstance may be”. As the 4A State Playoffs start back up this week for the Wildcats, just look over at the man singing the national anthem at the top of his lungs, the same one who will always be the center of attention in the dugout, because to the Millbrook Baseball team, that man means so much more than any hit, any out, or any win. To many, Kevin Iannucci is Millbrook Baseball.