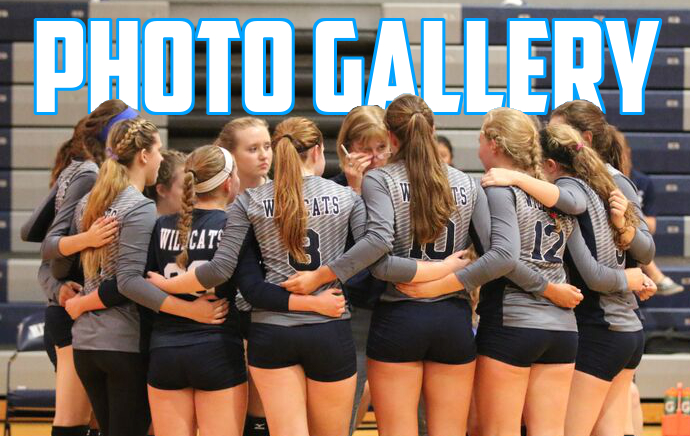 That was amazing!!!!! Congrats to @MillbrookMBB! We are SO proud of you!!!! Enjoy every second of this....you deserve it! 🐾💙

Millbrook and Wakefield Volleyball entered Monday night's match in a virtual tie for 5th place in the Cap-8 Conference. Not only were they jockeying for position in the conference but, HighSchoolOT.com had them in a tie for one of the final spots in their 4A State Playoff brackets. The Wolverines have long been a powerhouse in the area but it had been the Wildcats who took the last two matches, Monday night had a little bit of everything, including senior night ceremonies that honor Megan Alvey, Madison Wrenn, AC Riggins and Caitlyn Stallings, along with managers Olivia and Vanessa Merritt.

It was Wakefield that would have their way with the Wildcats early. Allie Dodge and Ade Owokoniran helped the Wolverines to a 6-0 first set lead. Owokoniran is a 6'2 sophomore that is in the top 5 of most statistical categories in the conference. Despite the strong play in the first set, Millbrook would hold her in check as she only registered one solo block and 9 kills. Millbrook would make a first set come back before falling just short, 25-20.

After dropping the first set, Coach Dickens' group turned things up a notch and cruised through the next three sets. Madison Wrenn would serve up a pair of aces in the second set as part of a team leading 5 on the night. She wasn't the only senior that would make strong contributions to the score sheet. The Wildcats' recent success can be credited to a change in the rotation on the court. Over the course of the last three weeks, Megan Alvey has made the switch to Libero and it has paid off, as she came through with 46 digs, which is a season high for any girl on the team, passing her 43 digs set last Thursday at Broughton. The senior success led to a second set win, 25-19 to tie things up at 1-1.

On the opposite end of the spectrum, a pair of underclassmen also had big nights for Millbrook. Sophomore, Taylor Rebne continued her strong play with a team high 17 kills, and Freshman, Arianna Rosario posted one of her best statistical nights of the season by recording a career high 5 kills. The strong play of the Wildcats led them to a second set win, 25-20 to give Millbrook a 2-1 lead.

Rebne's 17 kills led a very well-balanced Millbrook attack on Monday night. Wrenn added 6 kills, Sonia Wrobel also came through with 6 kills and her team leading 25th/26th blocks, Rosario's 5 kills were closely followed by Alvey's 4, and Shoun/Fiorini's 1. Morgan Fiorini's kill was one of very few for the Wildcats that she didn't set up. The junior defensive specialist is on an extremely torrid pace when it comes to recording assists. This strong play started last time the Wildcats and Wolverines squared off when she had 24 assists in a 3-2 win. Since that night, she has averaged 24.5 assists per game including a career high 43 against Enloe and a team high 34 against Wakefield on Monday night. She has now ventured into the Top 5 in Cap-8 assists despite missing all of non-conference play with an injury and only posting a combined 4 assists over her first two games back from that injury. The strong play up and down the Millbrook lineup help them rallied from dropping their first set to defeat Wakefield 3-1 after a 25-18 third set win.

With the win, Millbrook finishes the regular season with an 11-12 record, 6-8 in the Cap-8 conference. That record gave them sole possession of 5th place in the Cap-8 and the Wildcats will report a 22-game record of 11-11 to the NCHSAA for playoff seeding. Last season, Millbrook entered the playoffs as a #31 seed with an 8-9 record. At the moment, HighSchoolOT.com has projected this year's team as a #29 seed in the tournament, scheduled to travel to #4 seed Jack Britt in Fayetteville. The official brackets will be released on Thursday and the first round of play will begin on Saturday. If Millbrook indeed qualifies for the state playoffs, it will make it six straight years of playoff berth for the Wildcats. That run includes a 3rd Round appearance in 2013 when they fell to the eventual state champions in Wakefield. For more information, follow Millbrook Volleyball on Twitter at @mhswildcatvball.

Millbrook Volleyball is hoping for another late season push to squeak into one of the final spots in the NCHSAA 4A State Playoffs. The Wildcats are riding lots of momentum going into a season defining match vs. Wakefield to close out the season. Coach Dickens' girls took their two game winning streak on the road to Broughton. The Capitals entered as the #1 ranked 4A team in North Carolina according to MaxPreps. They came in with a 17-0 record along with boasting only one set loss all season long, that came back on August 22nd vs. Providence High School.

Last time these two teams met, the Caps dispatched of the Wildcats rather quickly in straight sets. On Thursday night, the tables would turn as Millbrook jumped out to an early 5-0 lead on a pair of Madison Wrenn kills in the first set. As much as Broughton tried to answer, the visitors would match them kill for kill, Morgan Fiorini would set up Taylor Rebne for the kill causing the Capitals to call timeout down 12-5 in the first set. Broughton would come out of the timeout by tying things up at 16-16, and eventually going on to win the first set 25-21. Despite the loss, that had been one of the Wildcats' best played sets of the season, for Taylor Rebne, the team's chemistry led to such positive results.

"Well everyone was on top of their game for us tonight. We were very intense throughout the match, and especially in the first set... I really liked how passionate all of the girls were."

Broughton would continue their winning ways in the second set as they went on to win handedly, 25-15. Early on in the third set, the Capitals were entering unchartered waters. Eight times this season, an opponent has scored more than 20 points on the Caps in a single set. That has only occurred three times in conference play until Millbrook was able to do so in the first set. As remarkable as that feat may have been, the 10-11 Wildcats did the unthinkable.

The third set would have a very reminiscent look to the first one as Millbrook jumped out to an early lead before Broughton came back. From there, each team matched themselves kill for kill. Rebne and Megan Alvey would break things open towards the latter half of the set as they gave the Wildcats a 19-14 lead. The Caps would not go down without a fight, they battled back to make it a two point set before Millbrook would extend it to 22-18. Coach Dickens would call timeout two plays later as Broughton's Katja Ehlers made it 22-20. The Caps would attempt to make the comeback in the third set but it came up short as Millbrook would win it 25-22. That is the second time that Broughton had lost a set this season, and the first time that they had done so in Cap-8 Conference play. Junior defensive specialist, Morgan Fiorini said the gameplan had always been to give the Capitals one of their toughest matches of the season and she feels like they executed that really well despite Broughton coming back to win the fourth set 25-17, and the match, 3-1.

"We really jelled as a team tonight. We had the mindset that we were taking at least a set off of them and that's what we did. We fought hard except for missing some key serves. We made sure that nothing came easy for them tonight... they had to work really hard and earn every point that they got tonight and that was the goal. I think this is the best we've played with this new rotation all season... Everyone was passionate and hard working tonight, and we really showed that we can fight against some of the top teams in not only the conference, but the state."

In HighSchoolOT.com's latest 4A Volleyball projections, the Wildcats were slated as one of the final teams to enter the bracket. Their position on the so called "playoff bubble" improved with a 3-0 win on Tuesday at Wake Forest, the loss on Thursday didn't help their cause but it provided loads of optimism going into their biggest match of the season. The best was indeed saved for last as Millbrook will host Wakefield on Monday night at 5:30PM for their Senior Night. The Wolverines won the 2013 4A State Championship but it was the Wildcats who have taken the last two matches, most recently a thrilling 5-4 win three weeks ago on the road. Both teams enter with identical records of 5-8 in the Cap-8 Conference, the winner of the match will presumably take one of the final playoff spots and fifth place in the conference standings. For this year's seniors, a win and playoff berth would make it four straight years with appearances in the 4A State Playoffs. Junior Varsity is scheduled to start from the Wildcat Gymnasium at 4:30PM with Varsity immediately following. For more information, follow Millbrook Volleyball on Twitter at @mhswildcatvball.