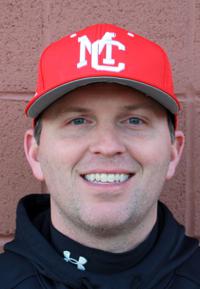 After leading North Buncombe (Weaverville, NC) to four straight Class 3A playoff berths, Wesley King took the helm of the Middle Creek baseball program in 2014.  He has a 47-28 record at MCHS, and led the Mustangs to their fourth Conference championship and their tenth consecutive playoff berth while earning Southwest Athletic Conference (SWAC) Coach of the Year honors in 2016.  Coach King’s overall career record is 123-57, including a 76-29 record in four seasons at North Buncombe.  He led North Buncombe to three consecutive Mountain Athletic Conference championships and was the Coach of the Year in 2011 and 2013.  Under Coach King’s direction, North Buncombe set school records for wins in 2012 and 2013.  He was named Western Carolina coach of the year in 2011 and his is teams have earned playoff berths in each of the past seven seasons.  Coach King was the Region 8 head coach at the Powerade State Games in 2013.  He has coached 17 players who have gone on to play college baseball and one player who was selected in the MLB draft.  From 2004-06, he was head JV coach West Henderson High, compiling a record 50-21.  From 2004-09, he served as head varsity assistant at West Henderson High, coaching hitting and third base for longtime coach Jim Hyatt. That team won 5 conference championships in 6 seasons and was 132-25 overall.  As hitting coach, he led West Henderson’s 2006 team to a then-state record team batting average of .432.  In 2007, the team hit .425, ranking second on the all-time state list at the time.  Coach King played second base at Western Carolina from 1996-99 and finished his playing career at Winthrop in 2000.  He teaches Health and PE at Middle Creek High and his family includes his wife Kelli and sons Sawyer and Cason.